Matt is good at fixing things . . . but he quickly learns that people are a little more difficult to put back together.

Matthew Knight is a ladies man. He’s as handsome as he is sinister, with a natural charm that wows the skirt off every woman he passes. Having already had a piece, Felicia knows how dangerous it can be getting too close to all that raw masculine power. If she’s learned anything from their scandalous weekend together, it is that spontaneity leads to chaos. Still choking on guilt from his untimely accident, she refuses to let him in. Matt wants in, and he can be very persuasive.

He will do anything to ruffle Felicia’s feathers and she will stop at nothing to hide how much she enjoys it every time he does. He refuses to surrender until she caves and gives him what he wants —what he’s wanted all this time —her.

When the pair reunite, their chemistry explodes off the charts, but can Felicia harness her frozen emotions and resist him? Although Matt comes armed with all the right words, can he prove to her that she means more to him than another weekend rendezvous? Witness the power struggle and see who comes out on top. 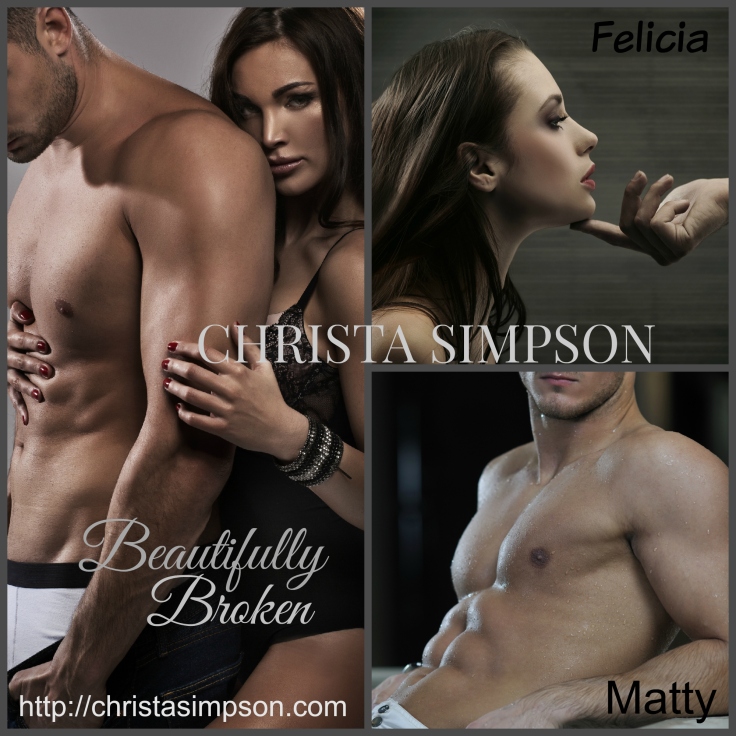 Matt wakes with a beautiful woman curled up next to him. He wraps her in his arms and holds her tightly. He’d given her the entire day and night to think. He quit with the tricks of seduction and they’d spent a good amount of time just talking and hiking and swimming. He had to keep busy to keep his mind straight after all. He has to face the facts. His heart is on the line. If this angel leaves him today, he fears he’ll be miserable for a long time to come.

His stomach twists with anxiety at the thought that she might not want to see him again. No, he can’t think that way. She has to want more. She is perfect for him.

Matt drags his lips across her neck and presses kisses across her beautiful chest. Felicia’s eyelashes flutter open and she stretches an arm out to the sky with a yawn. She draws her arm back into her body and sinks into him.

Her voice is soft and sleepy. “This is nice.”

Matt growls, drawing from his twisted thoughts. His lips trail down a flat abdomen. “Shut that pretty little mouth. Nice is never a word I want to hear coming out of it while I’m pleasing you.”

He showers wet kisses all over her body. “Amazing. Stunning. Life-altering, fine. But nice?” His tongue dips into her belly button.

She starts to giggle but he doesn’t slow his sensual assault. His tongue dips lower yet.

He teases her, with the solid edges of his body hovering over hers. “It’s been days since I’ve felt you from the inside out. I miss having all this woman wrapped around me.”

“I don’t think you can handle all this woman.” Felicia teases him, but she’s clearly aroused.

Matt takes her rebuttal a little too seriously.

“I’m afraid you might be right.” He pulls away from her body and sits on the edge of the bed. He rests his elbows on his knees and settles his fingers over the perimeter of his face. He wonders if she even realizes what’s plaguing him. He feels like a total pussy right now. Feelings have never snuck their way into his bed before, but that was before an angel had torn up his sheets.

“You know what today is, right?” he asks, without making eye contact.

She presses her lips together. “I do.”

It’s the last day they have together before it’s time to get back to reality.

He drops his hands and nods his head as he lifts himself to his feet. “I’ll be right back.”

Matt escapes to the bathroom. He feels like he’s having something of a nervous breakdown and she’s just lying in his bed looking all cute and innocent. He splashes a handful of water over his face. She says she knows what today is. It clearly isn’t affecting her the same way it is him. He is now going to have to leave it up in the air, until she says she’s ready to talk. No more forcing the issue.

After walking out of the bathroom Matt stops and stares at Felicia relaxing on the bed. This woman knows how to provoke him. He’s done his best not to ravage her every second of the day, but she makes it really difficult for him to resist doing so. Matt reaches for a clean pair of underwear and tosses them onto the dresser. Next he drops his day-old drawers to the floor.

He’s feeling a little spunky and so he turns around to face her, completely naked. “Why, when I take off my underwear, do I feel the need to jump toward you?” He props both hands on the back of his head and humps toward her with a couple of lewd hops.

Felicia can’t help but laugh. Score one for Matt.

He pulls on a pair of silky boxers. “You love it.”

He hates bringing it up, but he can’t help himself. “But then I’m not the one afraid of the word love.”

She feigns a pout. “Maybe you throw the word around too easily.”

“With you, Felicia, love is a word easily used.” He crawls onto the end of the bed. “There are a lot of things I feel for you right now that involve the word love.”

Felicia looks speechless, but she manages to get two words out. “Like what?”

“I love when you slip your cold hands in my pants, for one.” He crawls toward her, making his best attempt to look like a sexy, savage beast. “I love when your lips press kisses onto my bare chest.”

She continues to gaze intently at him until he’s hovering over her. She’s clearly waiting for something more substantial.

“I love when you look at me the way you are right now.”

She lets him kiss her, but promptly turns off that starry-eyed look and scowls at him.

“I love that look on you too,” he teases.

“What are you saying?” She maintains a serious expression as she delivers a painfully fleeting glance.

He cups her chin, but he doesn’t make her meet his eyes. “When you’re not around, I feel like a butterfly flying around with broken wings.” READ MORE

Christa Simpson, author of the bestselling Twisted Series, writes steamy new adult romances for Black Widow Publishing. She entertains her readers with protective alpha males and sassy, independent heroines. Her stories are filled with romance, suspense and sarcasm. Christa lives in Chatham-Kent, Ontario, with her husband and two beautiful daughters. She loves reading, writing, movies, music and dancing. She’s a dreamer and has always believed you can do anything you set your mind to.

Visiting the author is encouraged!

Get your copy today!

If you read for the dirty-talking alpha males, fast-paced entertainment and/or a wicked steamy romance, pick up your copy of Beautifully Broken by Christa Simpson today! This story is book 2 in the Destiny Series, but stands alone. It is intended for a mature audience. (18+) You must read this story!

We specialize in making dreams come alive. Visit us for top-notch author services, including book publishing, editing, proofreading, formatting, book teaser design, banners, books covers and more! If you’re an author looking for assistance, you’ve come to the right place. We pride ourselves on making writers' dreams come alive and will help you work toward make your next release a best seller. Kill your competition with Black Widow Publishing.